In Praise of a Stubborn Soul

Ordinarily, we don't honor disobedient people. Our history does, as many rebels are the  heralds of overdue change, but in this world where most folks "go along to get along" the contrary soul is a resented member of a community.  Every town has these intractable dissenters who, even when they are right, still alienate their peers with their hard-headed ways. Born outsiders, these nonconformists follow their own lonely stars though life, with few friends for love or guidance, not because they want to be difficult but because time and circumstance force them into this uneasy role.  That is the theme of T. K. Thorne in her second historical novel, Angels at the Gate, and it stars one of the Bible's most baffling women: Lot's wife, the woman who disobeyed a command from God's angels and looked back, at cost of her life. 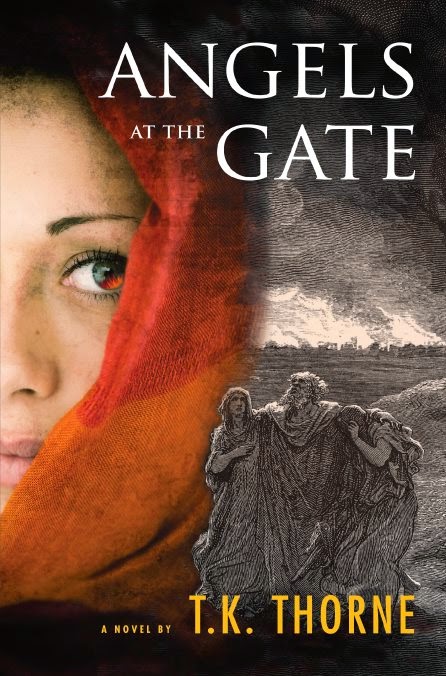 I never understood the behavior of Lot's wife when I read her story in Sunday School.   To me, when the town is literally falling to pieces around your ears and two white-garbed, winged men suddenly appear, shouting "Run for the hills and don't you dare look back!" it's time to follow orders and get the heck out of Dodge.  Yet, she looks back at the disaster, turning away just as her survival is assured.  Why would someone behave so foolishly?  T. K. Thorne creates a reasonable answer for this woman whose name goes unmentioned in the Bible.  Here, she is Adira, a girl with a mind of her own travels disguised as a boy so she can stay with her widowered father.   Adira finds it difficult to obey anyone when her good sense suggests otherwise, even the father she loves and respects.  Then, as a "girl posing in boy's clothing" Adira can't help but notice men and women are treated differently in her world.  Eventually she has to choose between the the life she wants as a female and the freedom she's enjoyed as a male.

T. K. Thorne combined religious, archeological and historical study to create this story of a woman who followed her own path in the world.  Here at last is an explanation for God's angels, those messengers who warn Lot and his family of their peril and the rest of Lot's behavior in Genesis.  Lot is the nephew of Abraham and described in the Bible as a righteous but Thorne recounts his actions and leaves it up to the readers to draw their own conclusions.

And, in the end, this is is not the story of a male who follows orders to escape but the woman who watched him leave before making a choice of her own.  Lot's wife may have been been a willful and stubborn woman but she had a life and reason for her actions and she deserves a better epitaph than "The Lady who turned into Salt."  Thanks to T. K. Thorne, Lot's wife is transformed back into woman, wayward and strong but alive.

March 5. 2015 is the publication date of Angels at the Gate.   Her book is available at Amazon and other booksellers if you live in the area of Birmingham, Alabama, you can  meet the author and obtain a signed personalized copy if you attend her publication party at The Harbert Center 2019 4th Ave N, Birmingham, Alabama 35203 between 4:30 and 7:00 p.m.  Details can be found at https://www.facebook.com/events/1560009640943936/
Posted by Unknown at 6:00 AM

RSS for the Istoriaphile's Corner

Do you want to be on my email list for news?

Books on my Reading Shelf

Meanwhile There Are Letters: The Correspondence of Eudora Welty and Ross Macdonald
by Suzanne Marrs

The Ghost of Mistletoe Mary
by Sue Ann Jaffarian
A mystery with a heart Lots of mysteries can scare you. All of them should entertain you. This one reminds you of what's important in life.

Death Is Now My Neighbor
by Colin Dexter

The Chocolate War
by Robert Cormier